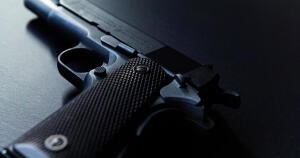 Gene was born in New York on September 28, 1954 to Fred Hartman and Eleanor.  He was a Police Officer and a Sheriff before eventually becoming a truck driver, which was more fitting for him. Gene loved driving anything with wheels from go-karts to 4 wheelers to semis.  He was handy and enjoyed working on them too.  Gene liked to travel to Kentucky and go out into rural areas to enjoy his hobbies.  He was a big supporter of the 2nd Amendment and a gun enthusiast.  Gene was never one to give up and had no qualms about going after what he wanted in life.  He had a big heart, loved easily, and despite his ornery nature was a good man, willing to go to the ends of the Earth for those he loved.  His wife Deborah was the love of his life, and there aren't enough words in the English language to say how much he cared and adored her.  He took care of his family and was a hard worker, and he never left any doubt to how he felt about you.  He will be sorely missed.

Gene is preceded in passing by his father Fred Hartman.

Services for Gene will be 7 PM, Monday, January 3, 2022 at Fountain Square Cremation & Funeral Services. Visitation will be from 4 PM until the hour of service.

To send flowers to the family or plant a tree in memory of Eugene "Gene" Leslie Hartman, please visit our floral store.